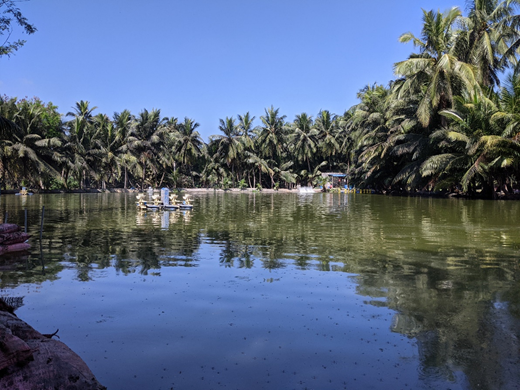 The overriding concern before us is not the quantity of fish produced but how to grow fish with care.

Siva, like many other fish farmers in West Godavari, leased a pond from the Village Panchayat. The cost of leasing common land, once inexpensive, has gone up significantly due to the growth of aquaculture. With the high lease cost and increased input costs, Siva could have settled for nothing less than his operation to succeed and earn back the money he spent. But did he attain success?

The grow out started well with relatively few mortalities. But then more fishes started dying. It went from bad to worse until a particularly bad week close to the harvest date when hundreds kept dying every day. These mortalities were caused by a number of issues impacting his pond, including low oxygen, argulus infestations and algal blooms.  Siva pumped additional resources to improve the pond’s condition on the advice of his neighbours and the local aqua businesses. None of it worked satisfactorily. High concentration of chemicals has now compromised the quality of the fishes and the nagging fear of low market yield.

Woefully, Shiva’s predicament is not unusual. Parasites and disease are amongst the greatest threats affecting Indian aquaculture. Mishra et al. notes that disease has become “a primary constraint to sustainable aquaculture production and product trade.” Argulus, a parasitic aquatic crustacean, is particularly endemic, with one study on Indian carp culture estimating total losses due to argulosis to be Rs 29,000 per hectare per year.

Disease is unfortunately not the only issue confronting the aquaculture sector. Farmers are investing heavily in prophylactic antibiotic use to safeguard their harvest, unread about pitfalls. Heavy antibiotic use has the natural consequence of increasing antimicrobial resistance (AMR). One study has found that India has amongst the highest rates globally of antimicrobial agents used in both humans and farmed animals, underlining that aquaculture is one of the “drivers of environmental AMR in India.” Scientists at the Central Institute of Fisheries Technologies-Vizag have recognized the problem of aquaculture-caused AMR, and are conducting a study to mitigate it.

These high rates of disease and subsequent overuse of antibiotics have brought aquaculture produce under the watchful eyes of consumers filled with apprehensions, outlining the health implications of eating such fishes. At a time when consumers are increasingly concerned about food safety, aquaculture is doing little to reassure such doubts.

Aquaculture faces serious challenges in India. Farming conditions are often poor, and occasionally toxic, far from the safe and nutritious fishes that consumers were promised. What is the solution at hand?

One approach here is to learn from similar models that have previously succeeded at improving Indian agriculture. One of the more successful ones has been the organic movement: The percentage of farms under organic production has more than doubled in the last 5 years. Before these farms transitioned to organic, they, like many aquaculture farms, were suffering from an overuse of chemicals being used in the cultivation. Such inputs, in both agriculture and aquaculture, are costly to farmers. And they are certainly not healthy for the humans who consume them—one famous study in Hyderabad found pesticide residues in schoolchildren’s urine samples, at a rate 10-40 times higher than their US counterparts.

The organic farming movement, while still relatively small, is taking positive first steps to mitigate these issues. And it’s not only beneficial for consumers—farmers are now producing a better product, with prospects of fetching a premium of 10 to 20%. Although there are costs in transitioning from conventional to organic farming, in the long-term what’s better for consumers may also prove the same for farmers.

Could aquaculture follow the organic model of eliminating chemical inputs? Perhaps fish farmers like Siva could eliminate antibiotic use in their ponds. In the short term, this could cause disease and parasite issues to skyrocket, but reducing chemical inputs is surely part of the solution. It should also be coupled with other paradigms.

Animal welfare: Part of the solution

One paradigm that our organization, Fish Welfare Initiative India Foundation, believes to bepromising is that of animal welfare. This is not particularly complex. By animal welfare we simply mean farming animals in such a way where they have a good quality of life, a life worth living. Instead of asking what will produce the greatest number of fishes possible, to consider animal welfare means to ask what is actually good for the fishes.

From our field visits and discussions with farmers, we believe that two of the most important animal welfare issues in Indian aquaculture are 1) water quality, and 2) stocking densities. We’ve interacted with many farms who suffer from poor water quality, as has been highlighted with Siva’s case. Lack of oxygen and other water quality issues are frequently exacerbated by the ponds being stocked beyond both the pond’s carrying capacity as well as the FAO’s recommended limit.

On further reflection, it’s hardly surprising that improving welfare leads the fishes to perform better. The same holds true for any type of animal: If you treat a dog better, it is less likely to develop some sickness. Even with humans, it’s clear that a child that was shown care and compassion is much more likely to flourish than one shown abuse and neglect. The farmers we work with intuitively grasp this fact, and they usually want their fishes to flourish more than anyone. Yet their desire to change is not enough—farmers often lack the resources and the know-how to improve the welfare of their fishes.

With these challenges in mind, we’re proud to announce the launch of the Alliance for Responsible Aquaculture, a coalition of fish farmers and local NGOs in Andhra Pradesh with an objective to improve aquaculture by improving animal welfare standards.  Our NGO, Fish Welfare Initiative India Foundation, and the other NGOs are providing free-of-cost water quality testing and regular consulting to participating farmers, who in turn are raising healthier, “happier” fishes. We are also working to establish market linkages to help higher welfare fishes fetch a price premium at market, just as with organic produce today. We’re currently beginning work in the Nellore and West Godavari districts, and encourage any interested producer or collaborator to reach out.

Across the world, the idea of treating fishes well to procure a better product has increasingly gained traction. Major retailers, such as Marks and Spencer in the UK, now include animal welfare policies for the seafood they source. In Egypt, where fishes are widely farmed in similar earthen pond systems as India, farmers who were facing similar antibiotic use challenges found that improving water quality and feed management reduced disease occurrences and thus reduced the need for antibiotics. And animal welfare is certainly not a novel concept in India: Showing compassion for all living creatures is a duty of all Indians, per Article 51 (G) of the Constitution.

Here in India, everyone works hard to pick the best food for their families—we’re all familiar with the site of mothers going to great lengths to gather the healthiest produce for their families. And when it comes to buying fishes, people are even more careful. With the pandemic impacting so many lives, the need every mother feels to ensure her family’s health and well-being has only deepened. We believe that by changing the paradigm towards fish welfare, aqua producers can rise to the occasion. There is perhaps no better way of honouring the care Indian consumers put into choosing food than by increasing the care with which we produce it.