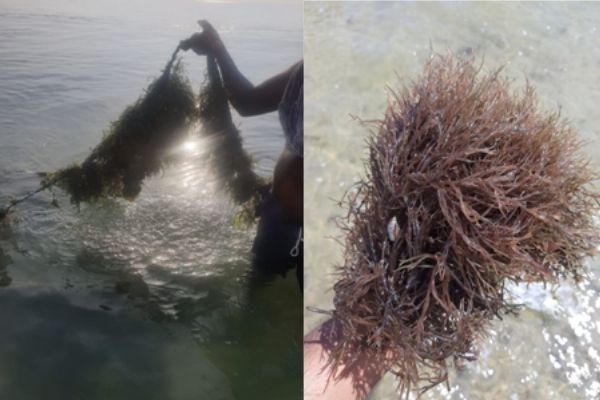 The economic importance of seaweeds in India

Seaweeds in general have a relative high nutritive value compared to other vegetables and have a good potential to be included in feed and food or used for their bioactive compounds in health, cosmetics and or pharma. If one takes into consideration that over 40% of the population in India is estimated to be vegetarian, it is obvious that seaweeds should play a role in the average diet in India.

However that is sadly not the case. If we look at India’s coastline there is ca. 7500 km with a continental shelf of 372,424 km2. India has about 840 different species of seaweed and a standing stock of 600,000 tonnes fresh weight.

Especially areas with hard substratum are good for seaweed growth like in Tamil Nadu, Gujarat states, and in the vicinities of Mumbai, Karawar, Batnagiri, Goa, Vizhinjam, Varkala, Vishakapatnam, and in few other places like Chilika and Pulicat lakes, Andaman and Nicobar Islands.

Taking into consideration seaweed cultivation, the coastal areas of Tamil Nadu and Gujarat states are the most important areas in India providing enormous potential for production and processing and the inherent job creation and social benefits in rural maritime areas. About 600-700  dry tons of agarophyes (like Gracilaria) are harvested and about 1500-2000 dry tonnes of alginophytes (like Sargassum) with a total value of $ 4-5 million.

Aquaculture is mainly focussed around the introduced carrageenophyte Kappahycus and has a production of about 150-200 dry ton a year with an estimated value of $ 300-400 k. Many ongoing trials are taking place with Gracilaria but no large-scale production is happening yet. The present turnover of Indian Seaweed is $ 150 million and growing year on year. However, if we look at India’s world ranking in seaweed production India does not appear in the top 10 (Fig 1. )

Fortunately, this fact is now being recognised by the Indian government who developed a roadmap to establish a seaweed processing industry and matching seaweed cultivation. In order to boost the cultivation of Seaweed, the Government of India has recently announced a package of $ 80 million for the development of seaweed in all the coastal belts of India. India aims to increase seaweed production to I million metric tons in five years announced by the Fisheries Secretary, Government of India. The central government has also put up a seaweed seedling facility for seaweed farmers and taken action to set up the Seaweed Park in the state of Tamil Nadu.

Mariculture of Seaweed is still only at its infancy but is generating strong interest. Technologies that have attracted the imagination of coastal stakeholders include mussel farming, seaweed farming, and sea cage culture. In some communities, seaweed farming has emerged as the most relevant livelihood strategy.

Given the rising global demand for seaweed-derived products, seaweed farming has the potential to generate further socio-economic benefits to coastal communities in India. The economic value of seaweeds significantly contributes to the sustainable development of rural coastal regions.

Currently the Indian domestic agar and alginate industry totally depends on the supplies from natural seaweed beds with occasional imports indicating huge potential for cultivation of these species. Furthermore, there is more opportunity if we can combine the growing of seaweeds in combination with fish and shellfish cultivation. This will not only remediate environmental degradation, seen as one of the major issues with expanding the sea cage farming, but actually help removing excess nutrient from fish cultivation activities while feeding the seaweed with these nutrients. In this context, the idea of bio-mitigation along with increased biomass production by integrating different groups of commercially important aquatic species which are having varied feeding habits is highly relevant.

Last but not least, seaweed farming also has a positive impact in respect of CO2  sequestration (or CO2 transition if used for feed or food) and contributes positively towards the UN SDG’s and addresses several societal issues  such as Sustainable farming, health and wellbeing, ocean restauration, sustainable diets, coastal ecosystem and climate mitigation.  Seaweeds………a win-win for India.

(The author is the CSO, The Seaweed Company Purple Turtle , Tamil Nadu. Views expressed are personal.)